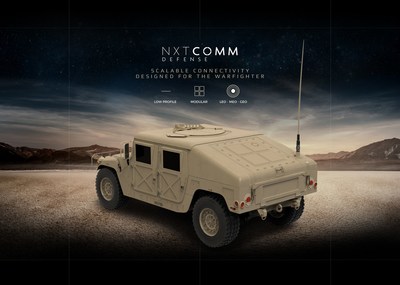 NXTCOMM’s Defense Division will serve as a leading manufacturer of antennas and antenna systems for defense applications and will initially target special forces most in need of portability, low-profile stealth, broadband capacity and high-level operational performance.

Huge shifts in military capacity requirements – fueled by the Space Force’s new warfighting architecture – can only be unlocked by ESAs that operate over LEO.

“LEO applications require a fast-tracking antenna capability that can track multiple satellites at once and NXTCOMM delivers with a fully wideband solution scalable up or down depending on the military’s specific connectivity requirements,” notes Stephen Newell, Chief Commercial Officer for NXTCOMM.

Chris Quilty of Quilty Analytics sees Defense as one of the most promising end-markets for non-GEO broadband constellation investment, which has exceeded $20 billion as of August 2020, according to a recent press release issued by the investment analyst firm.

“Our flat panel antenna technology will deliver rugged, reliable, powerhouse connectivity to military users, particularly the special operators in theater who need flexible solutions that give them the versatility to go from platform to platform – whether it be a vehicle mounted or manpack solution,” Newell added.

NXTCOMM Defense is commercializing its technology for aerospace and defense market applications at the company’s advanced antenna manufacturing facility in metro Atlanta.  In June, the company announced its AeroMaxSM antenna, which is easily scaled for military use cases.

“Our antennas are designed specifically for superior performance under the most demanding and mission-critical conditions possible. For one, we don’t require hard wiring different pieces of hardware to our antenna to track LEOs, MEOs and GEOs,” says Carl Novello, CTO.  “The fragmented aperture technology is already proven in the most demanding military applications and we intend to leverage this technology and heritage to defense markets and applications.”

NXTCOMM is on schedule to complete over-the-air tests of its core subarray to prove out its design in Q4. It then will proceed with full prototyping and over-the-air testing in early 2021. NXTCOMM is in active discussions with a host of system providers serving the military sector and looks forward to announcing its first key partnerships before the end of the year.